Our Officers Tell Their Stories 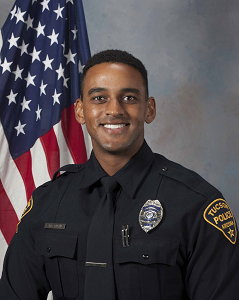 My name is Sheden Mezenghie and I have been employed by the Tucson Police Department since April 2018 and have been a sworn officer of the department since August 2018. I am currently assigned to Operations Division Midtown where I work as a patrol officer.

I am originally from Phoenix, AZ and moved to Tucson when I started my career here with TPD. I am an Arizona State University Alumni where I received my Bachelors in Criminal Justice/Criminology. Police work has always been something that interested me growing up as a child. I am the first and only in my family to get into Law Enforcement. As I made my way through high school right before finishing my senior year, I decided that I wanted to find a job where I could have fun every single day, and knew this was the right path. As I went through my 4 years at ASU, I took advantage of every opportunity that was available to me in regards to Law Enforcement. I went on ride alongs, prison and jail tours, department tours etc. I have been very fortunate and lucky to have met special individuals that took it upon themselves to mentor me and help guide me into this career.

The biggest thing I have learned and am still learning as a new officer is that people will love you, and people will hate you. It is my job to try and connect with all types of different people on a daily basis day in and day out. The one thing that I can control is my attitude and how I treat others. I have enjoyed my time with TPD thus far, and am excited to see what lies ahead in the coming years.

My name is Alex Quiroz. I have been employed with the City of Tucson for 12 years as a Police Officer. I am currently assigned to Operations Division South as a patrol Officer and have been since I started on my own as a solo Officer. I am currently an FTO and have been since 2019. I enjoy training Officers and hope that I can fit as much experience in during the time of training as I can to benefit their career. I believe a division is as good as the Officers working it along with a strong command staff. Since I have started, from my direct supervisors to the Captains I have worked for, I have experienced tremendous support and teamwork during my time of being here. We are a family as a whole, with each division striving to make their communities safe and enjoyable for residents, workers and visitors.

I started working at the age of thirteen. I worked for TUSD as a student worker. I delivered tables and books to classrooms. During that time, there was a budget issue and student workers were going to be let go. I decided to act rather than wait and applied for the University of Arizona Electrical Department as a trades helper. I was the youngest to be hired by the U of A at sixteen years old. Little did they know, I already knew how to drive a stick shift, as every vehicle was manual. I attended Tucson High School at the time and went onto Pima Community College to collect my Associates Degree. I learned the electrical trade and different aspects and codes required to complete jobs, however after five years, I knew this was not what I wanted to for the rest of my working career. I also played mariachi music for a group named Sonido De Mexico. We were based in Tucson and performed for many events such as weddings, birthday parties and anything someone wanted to hire a music group for. We traveled around to different states for competitions and performed for thousands at concert halls. I was also a member of the Tucson Police Department Explorer Program. I was able to learn a lot with the department by being a member. My most valuable experience was remaining at SALETC (Tucson Police Department Academy) for one week for a Police Academy Experience. Due to this experience, I was able to attend SALETC as a recruit with confidence and understanding of what was expected. I began the Tucson Police Department Academy at SALETC at the age of twenty-one.

In 2016, I married the most wonderful and supportive person and now we raise three adventurous boys together. I’m truly grateful for the support she provides. I have family members that were in the Police Department prior to me joining. Some have retired and some are currently still working. I also have family members who are applying to become part of the Tucson Police Department.

I’ve set goals in my time being here and so far I managed to complete one of the biggest. I set a goal that I would work for at least ten years at night. I passed my goal and worked 11 years, nights and weekends. As of 2019, I switched to working day shift. I have many goals for the remainder of my time here and hope to hit them all. 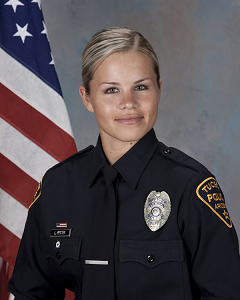 Originally from San Diego, Sergeant Lauren Pettey graduated from the University of Arizona with a Bachelor’s of Science in Public Administration in 2008.

In January of 2009, she joined the Tucson Police Department as a Police Officer Recruit. Upon completion of the Academy, she was assigned as a Patrol Officer in both Operations Division Midtown and Operations Division West. As a Patrol Officer, she became a Field Training Officer and Defensive Tactics Instructor. In 2013, she joined the Counter Narcotics Alliance as an undercover officer in the mid-level squad.

Sergeant Pettey was appointed to and currently serves as a law enforcement member on the Arizona Supreme Court Committee on the Impact of Domestic Violence and the Courts (CIDVC). As a collateral assignment, Sergeant Pettey has also been a Hostage Negotiation Unit Supervisor since 2017.